Much excitement has been generated with the introduction of Juvederm Voluma, a new injectable filler designed to add volume to the mid face and cheeks, making the face look more youthful and lifted. Unlike like other hyaluronic acid fillers, Voluma lasts for up to two years, which is a game changer in the world of injectable fillers!

Here’s an example of the power of Voluma. This is a 34-year-old woman from Dallas who complained that she had developed a tired and gaunt appearance to her face, which had developed over the previous 4-5 years. She underwent injection of one syringe of Voluma into each cheek (total volume of 2 mls). On her right is her picture one week after injection of Voluma. Voluma was injected predominantly into the cheek bones and the junction of the lower eyelid and the cheeks. Note the incredibly natural contour to her cheek and the youthful fullness. 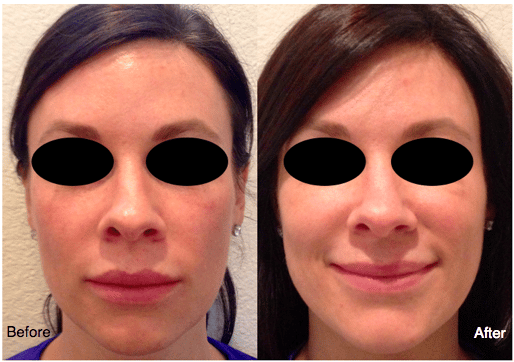 Patients should expect slightly more bruising with Voluma than with other injectable filler treatments to the lips or marionette lines (nasolabial folds). Because Voluma is injected deeper, as well as into a region with a plethora of blood vessels, it is very common to bruise. Patients should refrain from taking medications that make them prone to bleeding for a few days ahead of their treatment, such as aspirin, ibuprofen, toradol, and other NSAIDs. Icing their cheeks for the remainder of the day after the procedure also considerably lessens bruising.

Through July 1, Dr. Jejurikar is offering special promotional pricing on Voluma. Given that Voluma lasts for two years, taking advantage of this pricing today will benefit you for years to come! Call Dr. Jejurikar’s Dallas or Plano offices at 214-827-2814.